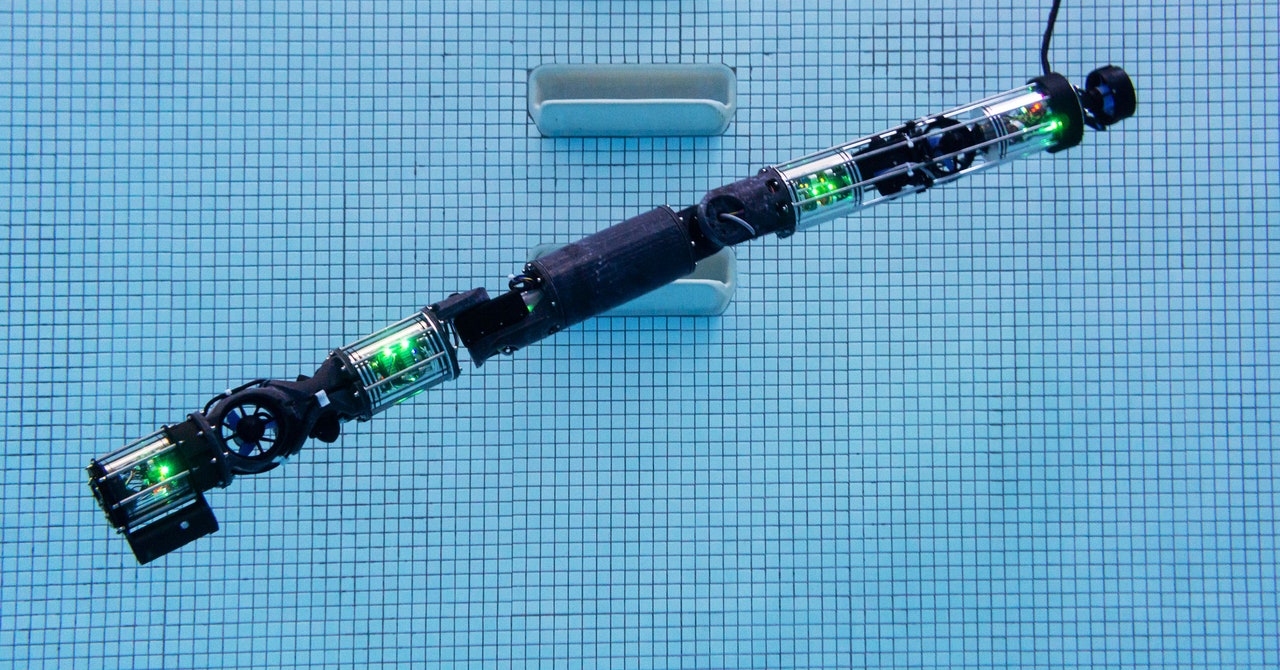 When sea snakes swim, they wind their way through the water by flicking their flattened tails, which is super graceful but requires a whole lot of coordination. So when roboticists at Carnegie Mellon University decided that it was time for their landlubbing robot snake to take to the water, they took a shortcut. They approximated the wildly complex biomechanics of a serpent—and then loaded the machine with propellers.

The result is a sort of wiggling torpedo, sans warhead: the Hardened Underwater Modular Robot Snake. As you can see in the video below, it manages some impressive swimming by combining an aft thruster to produce forward movement with lateral thrusters along its body for stability control, plus it uses some bending joints (actuators, in the parlance) to position the lateral thrusters. “It’s less biologically inspired right now, but still, it’s a pretty good robot,” says CMU roboticist Howie Choset, who codeveloped the machine. “We’re doing something in the middle. We’re trying to mimic the motion as best as we can, maybe at a macroscopic level, with conventional motors and actuation.”

That’s the beauty of robotics—engineers don’t have to follow the rules of natural selection. Choset and his colleagues want a robot that the US Navy can use to inspect ships and submarines, one that can slip into tight spaces, like ballast tanks. But it’s safe to say that the Navy doesn’t need a snake robot that also, let’s say, bites. “When biology is evolving, it’s evolving a system,” says Choset. “It’s not evolving one unique capability. So a snake can slither on the ground in unique ways, but the snake also poops, it also eats, it also reproduces—it has all these other things onboard that are there for the survival of the snake but certainly not to serve locomotive benefits in any way.”

Think about how a bird compares to an airliner, which is biologically inspired in that it produces lift with wings, but those wings are fixed and paired with jet engines. And they’re missing a few of the add-ons that nature gave birds. “Airplanes fly long distances, but their wings don’t flap, and they don’t have feathers,” says Choset.

Choset’s team can approach snake design in a way that’s fundamentally different from evolution. The land-based version of their robot uses actuators that move in concert to propel the machine forward, which is similar to what a real snake does. But in the water, the robot doesn’t have a hard surface to push off of—drop the land version in a pool and it’ll sink like a very expensive stone. So instead of reproducing a sea snake’s hypnotic winding movements—a complicated coordination between muscle and bone—the researchers opted for thrusters that push and steer the robot.

At the moment, the robot’s swimming isn’t particularly sophisticated, though an operator can remote-control the machine through underwater hoops using a camera in the snake’s “face” to find the way. But the team’s idea is to refine the algorithms that control its movement by using machine learning: By building a digital version of the robot in simulation, an AI can try many, many random ways of swimming, eventually landing on the most efficient kind of locomotion through trial and error. Then Choset’s team would port that knowledge into the real-world robot, giving it the maneuverability it would need to really squirm into tight spaces. Other roboticists are doing this with other machines that mimic animals’ locomotion, in fact, for instance teaching a doglike four-legged robot how to walk or adapt to different kinds of surfaces.

Is CSS a Programming Language?

Is CSS a Programming Language? I have a real distaste for this question. It might seem like a fun question to dig into on the surface, but the way it enters public discourse rarely seems to be in good faith. There are ulterior motives at play involving respect, protective emotions, and desires to break or […]

2021 Design Systems (Survey/Courses) My friends at Sparkbox are doing a survey on design systems, as they do each year. Go ahead and fill it out if you please. Here are the results from last year. In both 2019 and 2020, the vibe was that design systems (both as an idea and as a real […]