This is how I knew I needed to learn how to use a torque wrench: It was Christmas Eve, and I was avoiding my family by working on my Jeep.

The glass on the rear tailgate was popping open every time I hit a bump, pinning the windshield wiper, admitting water, and on dry days making a glass-on-plastic squeak that made me pray for rain. I’d looked up the problem online, and it turned out all I had to do was loosen the bolts mounting the glass to the hinges, slide the glass a tiny fraction of an inch downward, and re-tighten them.

➡ You love badass cars. So do we. Let’s nerd out over them together.

With the glass hanging a little lower, it wouldn’t pop free. Simple enough. And I made it all the way to the re-tightening without incident.

But then, as I was standing under the raised glass, absentmindedly watching people strolling through the park across the street, I cranked the wrench one time too many. There was a loud crack, and in an instant where the glass had been was sky, and I was covered with a million tiny shards. I had to call my folks for help. Karma.

My mistake? I should have been using a torque wrench, a type of wrench that tells you exactly how much force you’re applying to fastener so you don’t over- (or under-) tighten. My situation wasn’t the stereotypical use—torque wrenches are far more commonly applied to tighten lug nuts. But the fact is, they’re indispensable tools for mechanics because every fastener on your car—including, yes, on your liftgate glass—has a specific torque rating. Here’s how to use a torque wrench.

Too Much Is Too Much

Car manufacturers specify a ­proper tightening level, a torque ­value expressed in foot-pounds, that can usually be found in your vehicle’s owner’s manual. Torque is a rotational force applied around a point or, in this case, a nut. Put a 1-foot-long wrench on a nut and apply 10 pounds of force to the opposite end. You’re now twisting that nut with 10 ft-lb (distance times force, or 1 foot times 10 pounds). Use a 2-foot-long wrench and apply 50 pounds of force, and you’ll have 100 ft-lb, which, happily, is just about as long as most lug wrenches, and as much force as most elbows are happy cranking on.

While most mechanics rely on a well-calibrated elbow to tighten things, it’s vitally important that the tightness of a fastener fall within a fairly narrow range. Too loose and there’s the danger of the nut or bolt spontaneously unscrewing down the road. Or maybe the gasket or O-ring fitting clamped by that bolt will leak. Too tight and there are other risks: The bolted-together part may be compressed, bent or otherwise damaged. The bolt shank could break, or the threads may strip, providing no clamping force at all. The best way to tighten fasteners is with a device called a torque wrench.

Why don’t we simply tighten every fastener of any particular size to the same torque value? Why do we need a shop manual to tell us that one 5⁄16-inch bolt holding down a valve cover needs 11 ft-lb, while the 5⁄16-inch stud on the shock absorber needs 20?

Let’s discuss what happens when you turn a nut or bolt head. The threads are a form of inclined plane or wedge, the simplest type of tool. As the inclined plane is wedged (turned) into the threads, it applies a force along the bolt’s length, effectively making the bolt a tension spring. This tension in the bolt shank clamps two parts together. If the clamping force is greater than the load exerted between, say, the head and the block, those two pieces will never spontaneously get loose.

And the more twisting force you apply to the bolt head or nut, the more clamping force in the joint. So just tighten­ it until it won’t come loose, right?

Wrong. Differences in overall bolt length, the material of the clamped parts, the presence of a gasket between the two parts, and even the alloy of the bolt itself affect the proper torque.

Also, the proper torque value takes into account the friction between the threads, which is the single biggest variable that affects the relationship between the torque applied to the bolt head and the clamping force. Friction arises from the threads as well as the rotating bolt face scrubbing along the stationary workpiece.

Overcoming friction can account for as little as a few percent or as much as 50 percent of the force needed while tightening a nut or bolt. And that means that the clamping force can vary widely­—not good when you’re installing a ­cylinder head or an intake manifold. 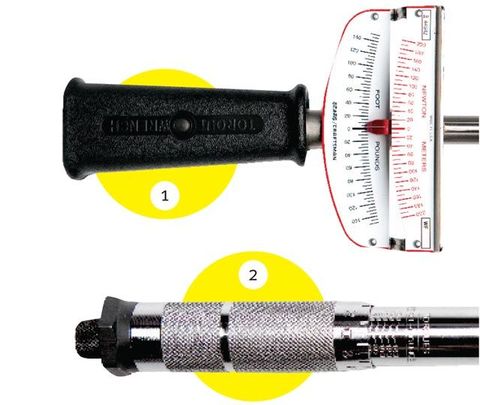 This is the wrench for those who don’t regularly need a torque wrench. The large center beam bends as you apply torque, while the unbending pointer beam lets you read the torque directly. If it goes out of calibration, simply bend the pointer back to zero with a pair of pliers. The single biggest disadvantage is that your eyeball has to be parked directly above the pointer while you read the scale, which is tough in hard-to-reach places.

This pro-grade tool is preset to the correct torque and will click tactilely and audibly when it reaches the correct torque. It’s highly repeatable and accurate, but should be returned to zero after every use. Even so, it should be calibrated regularly if used for critical parts like suspension and internal engine fasteners. Don’t use your torque wrench like a ratchet for disassembly—save it for final assembly. 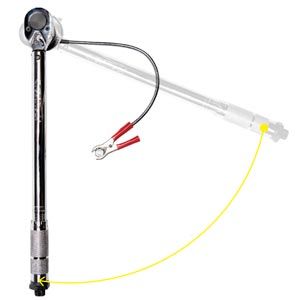 To Lubricate or Not

Wire-brushing the threads will help remove rust or sealant. Engine fasteners, like head bolts or main cap bolts, are often specified to be torqued with 30-weight engine oil wetting the threads and washer. If you’re installing a fastener that has a dry torque spec, and the threads and bolt face are oiled, you’ll need to reduce the torque by 15 to 25 percent, because the slipperier surfaces will decrease friction.

Teflon-bearing lubes or moly-sulfide engine assembly lubes can reduce friction enough to require a 50 percent reduction in tightening torque. Even casually substituting a zinc- or cad-plated bolt or washer for an unplated one calls for, respectively, a 15 or 25 percent reduction in applied torque, because the plating acts as a lubricant. Fail to heed this advice and the fastener will be seriously overtightened. You’ll either snap it or crush a gasket to the point where it leaks.

On the other hand, rust or burrs on the threads can increase friction enough that a fastener tightened to the specified value won’t provide sufficient clamping force. The shop manual will specify whether the fastener is supposed to be dry or lubed. In either case, prep your bolts. Don’t forget that residue from the parts washer or that pie tin full of kerosene you’re using to clean parts has oil in it.

Even a quick blast of compressed air to dry off a fastener will leave an oily film behind, affecting ultimate torque. If you’re really fastidious, clean up with some aerosol carb or brake cleaner, followed by more air. If you’ve used grease or anti-seize compound to keep the brake discs from seizing to the hubs, take care not to contaminate the studs or lug nuts.

Increasingly, critical fasteners like cylinder-head bolts, engine-mount fasteners and intake plenum bolts require what’s referred to as torque-plus-angle tightening. Due to inconsistencies in the friction between the threads and bolt face, conventionally torquing a fastener isn’t consistent enough.

A few percentage points of difference in friction, due to irregularities in the threads, a burr, rust or old thread sealer, can multiply into a huge variation in the fastener’s tension. That can lead to spontaneous dismantling of the joint. The tightening spec for these fasteners requires two stages.

The bolt head or nut is first tightened—in a normal crosshatch sequence if there are more than two—to a prescribed torque value; then, again starting with the first bolt, to a second, higher value. Only then should it be turned, in a single smooth move, an additional number of degrees. The only way to do this accurately is with the torque-plus-angle fixture.

The fixture’s arm is clipped to some nearby object to anchor the protractor dial, which must be returned to zero after the initial torque is applied. Then the wrench is turned the specified additional rotation. Again, this should occur in the customary sequence for multiple fasteners.

Critical fasteners—cylinder-head bolts are the poster child here­—are so difficult to properly tighten that not only does the manufacturer specify torque-plus-angle tightening, the bolt is a one-time-use item that has to be discarded if it’s ever removed. These torque-to-yield bolts generally have a necked-down straight section between the threads and the bolt head.

This method assures that all of the bolts clamp the two parts together with nearly identical force so critical things like head gaskets won’t leak. You’re probably wondering why engineers don’t simply specify larger bolts that can apply enough force without permanently deforming. Those larger bolts can be overtightened, and too tight is just as bad or worse than too light.

Finished torquing the wheels or ­cylinder head? Don’t forget to save the torque wrenches’ calibration by returning the micrometer scale to zero before you stash it in your toolbox.

Whenever there are more than two fasteners securing a part, it’s important to alternate the tightening among them. Here’s the correct procedure: Start all the bolts or nuts a few threads and then run them hand-tight. Often, the shop manual will show a specific tightening sequence. Tighten mildly by hand, then to the torque spec

1. Circular patterns of bolts, typically the lug nuts on wheels, should be tightened not in a circle, but in a crisscross or starfish pattern.

2. Larger, oblong parts like cylinder heads often have a specific sequence for proper tightening, generally starting near the middle and circling around.

Markings on bolt heads designate the bolt’s strength class. Don’t ever use an ungraded bolt with a blank head on anything more highly stressed than a barbecue. SAE Grade 5/DIN 8.8 bolts are appropriate for most uses, while SAE Grade 8/DIN 10.9 bolts are higher-strength fasteners for critical applications like suspension parts and connecting rods. There are many specialty fasteners that have unique markings as well.

Spanish Regulator Green-lights Institutional Crypto Investment Spain’s market regulator has announced that it will allow firms operating funds to make crypto investments – but only under certain conditions. Per El Economista, the National Securities Market Commission (known locally as the CNMV) has published a new set of guidelines for institutional investors. The guidelines show that the CNMV is […]

Altcoins Take The Strongest Hit Again Amid China Crackdown News As China is sending more negative news to the crypto market, altcoins are once again suffering the most. Bitcoin (BTC) dropped from USD 41,760 to below USD 37,000 in half an hour and continued correcting lower. At 19:53 UTC, it trades at USD 36,082 and is […]

Life could be hiding deep under Mars

Life could be hiding deep under Mars Living microbes could be hanging out beneath the Martian surface, according to a new study of Mars rocks from Brown University. The research shows that Mars could provide a stable, nourishing environment there for billions of years. All life needs energy to survive. The life on Earth’s surface […]