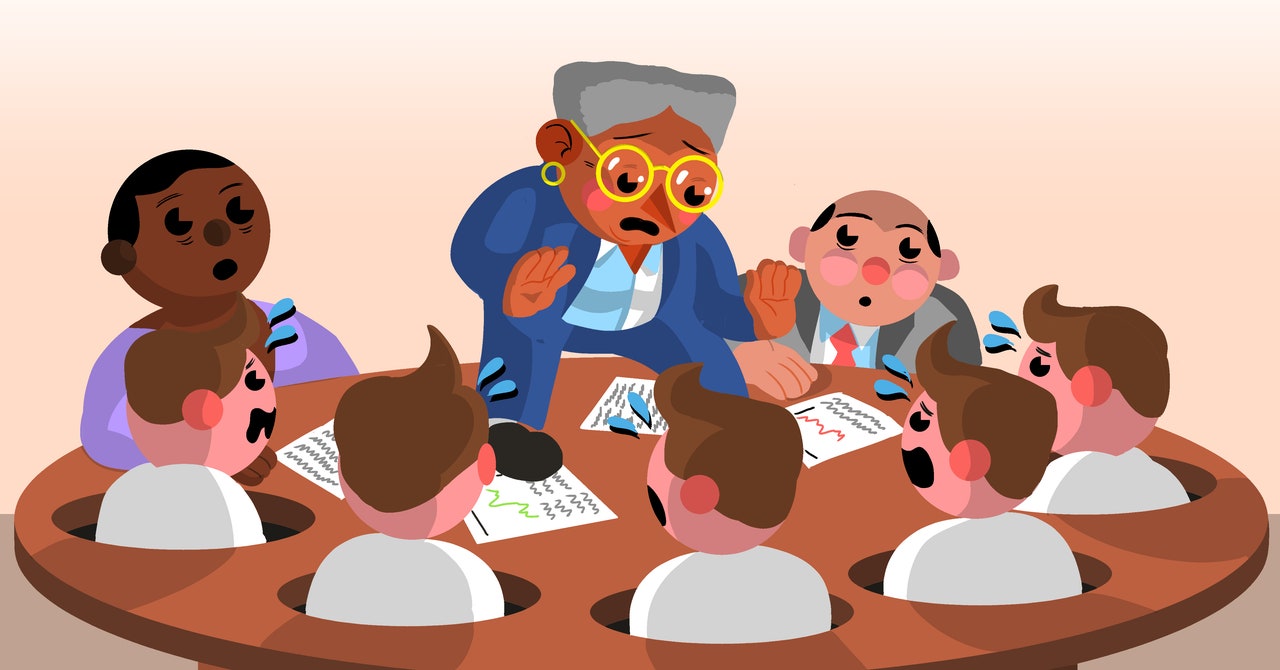 I’m a female middle manager at a medium-size company. “Ben,” a male colleague with whom I’m relatively close, just told me that “Steve,” a male colleague with whom I’m not close, told Ben that he’s scared of me. Steve and I don’t work in the same department but are in meetings together fairly frequently, and now I’m so self-conscious around him. I’m a nice person, not a bully, I swear, but I like to be direct, which I think Steve interprets as intimidating? Ben thinks it’s just because I’m a woman, but I have no idea how to act around this guy now—help!

This is absolutely, definitely, indubitably happening because you are a woman. I need zero additional information about your workplace or your personality or Steve to know beyond a shadow of a doubt that he is either scared of you—or he’s telling people he’s scared of you—because he’s uncomfortable with women in the workplace.

I know this because I have been told four times that I come off as scary, and every time the accuser has been a man. (In 75 percent of those cases, as in yours, the man has evidently been too scared to tell me himself, so I get the message filtered through yet another man.) I know this because I asked a bunch of other women—women I know to be nice people!—whether a man has ever accused them of being scary at work, and every single one said yes. I know this because I have worked with many men who call themselves feminists but visibly treat men and women differently in the office, and because I have worked with many women who have consciously or subconsciously altered their behavior at work over time to accommodate them. I don’t know your Steve, but I know Steve.

I also know because the academic research bears it out. A 2015 study published in Personality and Social Psychology Bulletin found that “men feel more threatened (relative to women) by women in superior roles (relative to men in superior roles) and, as a result, engage in more assertive behaviors toward these women.” In one part of the experiment, men were instructed to decide how to split a $10,000 bonus between themselves and a fictitious manager. When a female manager was described as “ambitious,” men kept significantly more than half of the money for themselves. “Men are perceived to be more deserving and suitable leaders than women,” one of the study’s authors told the Cut at the time. “Ambitious agency is also consistent with the male gender role. Therefore, men seeking power don’t dismantle or challenge the traditional gender hierarchy.”

Validation from an internet advice columnist that the problem is Steve and not you doesn’t solve things, I realize. It does, though, allow us to confront the correct problem: You work with a man who is uncomfortable with women at work. (Said another way: You’re not scary.) Trouble is, there’s no easy way to make men better at working with women (lol/sob). Whatever you do, please don’t try to modulate your behavior around Steve; changing who you are rarely works very well, and it’s an unfair ask regardless. Confronting someone who already thinks you’re “scary,” meanwhile, isn’t likely to go great either. You’re going to feel self-conscious around him for a while, but try your best to be your normal, kind, direct self—this is his problem to deal with, not yours.

Let’s talk about Ben, though. Some coworkers are so close that they tell each other everything, and if my closest colleague had failed to tell me that some dude had called me scary, I would be gravely disappointed. But your use of the word “relatively” makes me think maybe you and Ben’s aren’t that close, in which case he absolutely should not have told you. That’s not a message anyone would want delivered by anybody except an extremely close friend! It’s too late to put that toothpaste back in the tube, but Ben is really the one with the obligation here. If he didn’t put Steve in his place in the moment, Ben should go back and say something. He can start by telling Steve there’s nothing scary about you, you’re actually great to work with, and that he should try getting to know you better.

For extra male-ally cookies, Ben should also gently suggest (or not gently!) that it’s a bit sexist to call a woman scary because she says what she means. Again, it’s true that there’s no easy way to make men better at working with women. But there is a hard way: It requires the Bens of the world stepping up.

Thriving in the Future of Work Means Focusing on Your People – SPONSOR CONTENT FROM DELOITTE During this era of unprecedented instability, leaders in every sector and region have been managing their organizations for resilience through three phases. First came the response, when leaders made bold decisions to adapt and accelerate transformation so their organizations […]

Biden Makes a Deal With Uber and Lyft in the Name of Vaccines Joe Biden has been president for only four months, but he’s already been hailed as the country’s most pro-labor leader since Franklin Delano Roosevelt showed up at 1600 Pennsylvania Avenue. He wants to make it easier for workers to unionize and would […]