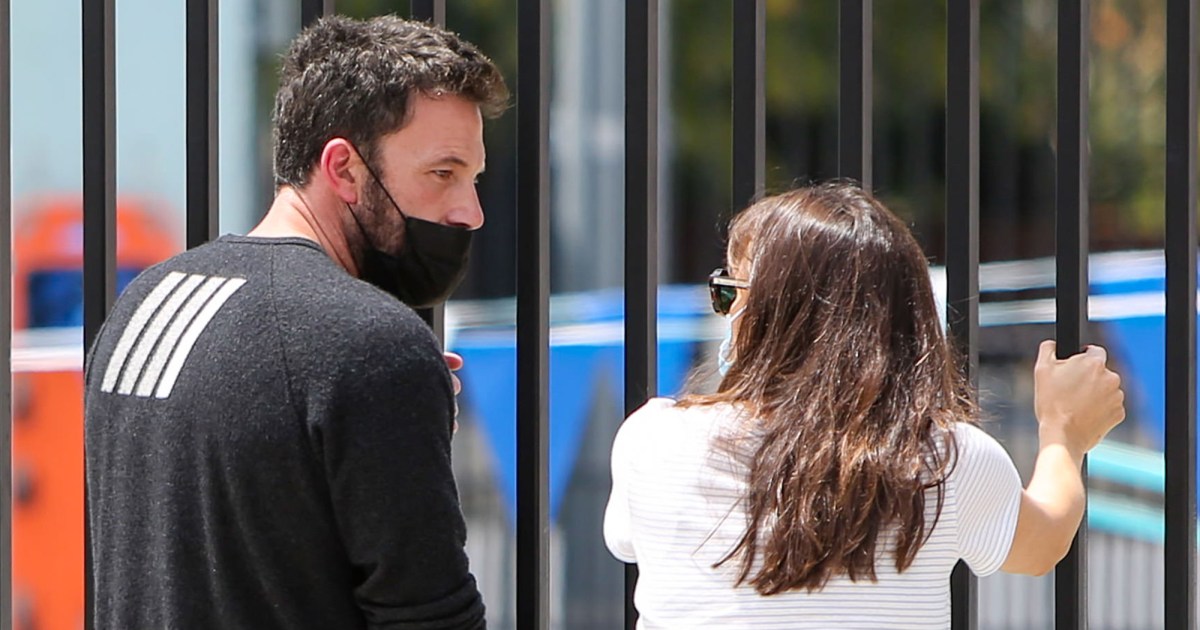 Coparenting and excelling at it! Ben Affleck was spotted hanging out with ex-wife Jennifer Garner while their son, Samuel, enjoyed a swimming lesson on Saturday, May 1.

In photos obtained by In Touch, the A-lister, 48, wore a black long-sleeved tee and jeans while Garner, 49, rocked a white tee and jeans. The proud parents — who wed in 2005 and split in 2015 — both accessorized their casual looks with face masks. They seemed to be enjoying each other’s company nearly three years after finalizing their divorce, and even shared a laugh with their son when he exited his lesson.

The photos come on the heels of news that Ben “is hanging out” with ex-fiancée Jennifer Lopez again, nearly 17 years after their split in 2004. “A lot of time has passed, they’ve both matured,” an insider previously told In Touch. “Jennifer still cares for Ben, she never really stopped. Apparently, they reconnected like no time had passed.” The singer, 51, recently split from fiancé Alex Rodriguez after two years of engagement and four years together.

The Argo actor and the singer are “very happy to be in each other’s lives and are taking it one day at a time,” the source explained at the time. “Ben and Jennifer are smiling from ear to ear, catching up on all they’ve been through, talking about their kids, projects, it’s like two old friends reuniting.”

The exes met on the set of Gigli in 2002 and were engaged to marry the following year — but they split days before the wedding due to the media attention. “All the last-minute, broken engagement drama is behind them,” the insider added. “They had hashed that out years ago, even though Jen still gives him grief about it, which he admits he deserves … it’s all in the past.”

The “Waiting for Tonight” soloist shares two children — 13-year-old twins Emme and Maximillian — with ex-husband Marc Anthony, whom she was married to from June 2004 to June 2014. In addition to Samuel, the Gone Girl star and the Alias alum share 15-year-old daughter Violet and 12-year-old daughter Seraphina. The coparents split in October 2015 after ten years of marriage.

Scroll through the gallery below to see photos of Ben and Garner hanging out at son Samuel’s swim lesson.

Sarah Jessica Parker Has Us Obsessed With This Oversized Dress Trend

Sarah Jessica Parker Has Us Obsessed With This Oversized Dress Trend Us Weekly has affiliate partnerships so we may receive compensation for some links to products and services. Have you decided what your whole fashion vibe is going to be for this summer yet? Obviously you want it to feel like you, but which part […]

Shanna Moakler’s Claim About Travis Barker Cheating on Her With Kim Kardashian Is ‘Not True’ Shanna Moakler allegedly accused ex-husband Travis Barker of cheating on her with Kim Kardashian during their marriage in a newly surfaced direct message, but it‘s “absolutely not true,” a source close to the situation exclusively tells In Touch.  “This is […]

All the Celebrities and Reality Stars Who Have Tested Positive for Coronavirus in 2021 The global coronavirus pandemic continued on into 2021 after reaching its peak in March 2020. Since then, celebrities like Larry King contracted COVID-19 in the new year after many stars have opened up about their past experiences with the virus. One […]